Since we started renting land from the National Capital Commission in the late 80’s we’ve been finding all kinds of artifacts from days gone by. Horseshoes of all different sizes and shapes, as well as nuts and bolts, and various pieces of metal that had fallen off of old machinery.

Last week my younger brother James was visiting my brother Dave in the fields and was walking behind the cultivator when his eagle eye spotted an old penny, a 1895 Canadian penny with a young Queen Victoria on it.

In days gone by these fields were worked by my wife Evelyn’s family, the Kemp’s, so maybe this penny belonged to her great grandfather Adam. What a strange time to find this treasure, this being Budd Gardens 100 years in Blackburn anniversary. Photos of coin taken from web (coin from field was worse for wear) and man in buggy is Adam Kemp. 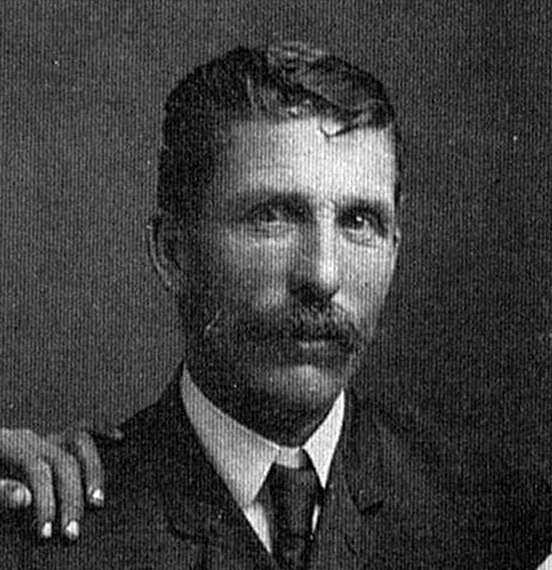 This is an amazing story of a young lad who lived in Blackburn and who at a very young age set out on an adventure that is hard to imagine today.

In 1873 as a boy of 14 Adam Kemp set out by himself from Blackburn with a team of horses belonging to a neighbour, George Purdy, to go to work at a lumber shanty on the Madawaska River near Arnprior. Remember there were no highways and roads like today, the trip would have taken days. After he had been in camp about two months he became seized with a great homesickness and decided to go home. He was given his pay order and let go by the foreman but could not collect the money until he got home.

So Adam and the team of horses set off for Blackburn. Kind people along the route gave him food and board as he had no money. Eventually he made his way back home to Blackburn and presented the pay order to George Purdy and collected his pay. Mr. Purdy was not too happy that Adam had come home early.

Does anyone think that a 14 year old boy would be given this kind of responsibilities today?

Blackburn in a different time 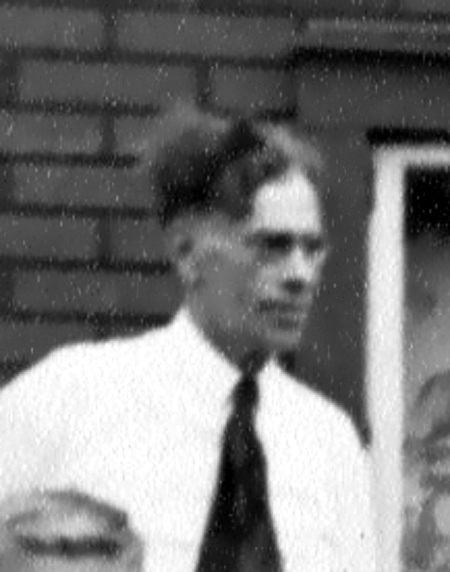 Several years ago, Budd Gardens began renting lands from the NCC in Blackburn below the Blackburn Bypass. These fields had been used as pasture land for decades and as we began to till the soil and plant our crops, ancient hidden treasures began to reveal themselves.

Thrown from different size workhorses, some small some large, horseshoes galore from a different agrarian era kept surfacing. I showed some to my father-in-law, Eldon Kemp, who is now in his mid-eighties. Except for the war years, when he served in the Navy, Eldon has spent his entire life in Blackburn. He picked up one shoe that was different from the rest, as it has several long rusted nails in it and declared, “This is from a horse that died and was either buried out in the fields or left for the wildlife to dispose of.”

Blackburn always had a blacksmith and I’m sure these men were responsible for re-shoeing the horses that had lost their iron shoes in these fields. Leo Mainville, a bachelor, was the blacksmith when I was a child. He could do anything from shoeing horses to building a complicated piece of farm equipment of his own invention.

Leo owned one plate, one fork, one knife, and one cup and after each meal he would use his bread to carefully clean his plate and cutlery with an expert swipe and then turn these utensils upside down onto his table, ready for his next meal. As a blacksmith, he was a genius, but as a homemaker, he was lacking.

Another note of wisdom from the past is this. When hanging a lucky horseshoe in your home, always have the open end pointing up. If you hang it in reverse, all of your luck will fall out. 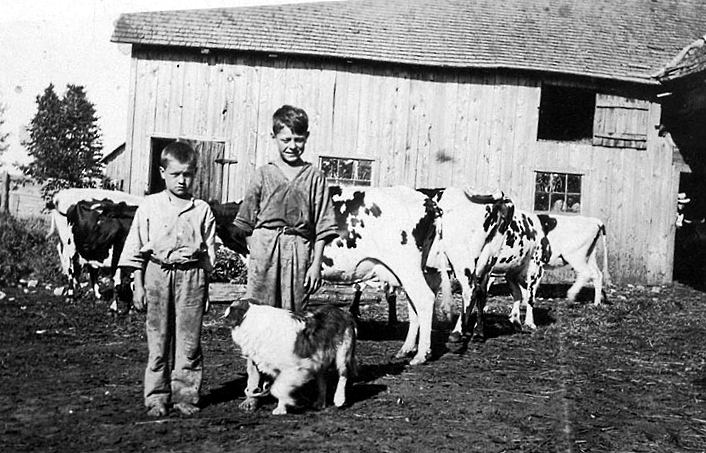 Blackburn was a farming and gardening community in 1911. The farmers were for the most part English and the gardeners were French.

Enter my Ukrainian grandfather and I’m sure the neighbours must have thought someone from Mars had arrived. His real name was Petro Bodnaryk and he spoke very little English or French. I don’t know when the name was changed to Peter Budd but the reasons are obvious.

The farm he bought in 1911 was already an old property with it’s original log buildings. Blackburn had been a farming community starting around the 1830’s after the trees had all been lumbered.

When this farm was expropriated in 1942 by the Department of National Defense grandfather still owed the entire principle on his mortgage. (Photo is of my uncle Stephan and my father Michael, circa 1925. They sure look dirty and poor but happy.) 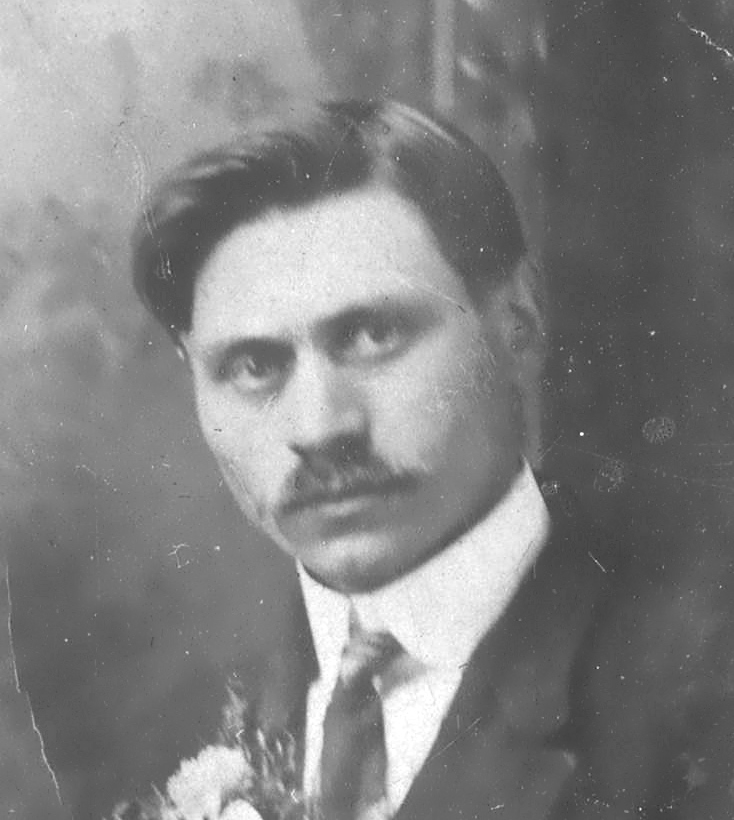 Peter was orphaned at the age of 5 when his father, Nazaary Bodnaruk was struck by lightning. “On a clear cloudless sky a freak lightning struck as he was walking with a hoe over his shoulder”.

His mother, Fedora Djaman, died at his birth. He had no siblings.

When Peter grew up he would always be the last person to come in when a lightning storm approached, almost as if he were challenging the gods.

Peter never attended school, and was raised by the people of the village. He earned his keep by being a shepherd. At age 19 he sold the property of his deceased parents for enough money for passage to Canada.

Peter arrived at the port of Quebec City on May 16, 1904 aboard the vessel ‘Phoenicia’. The ship sailed from Antwerp, Belgium and then Hamburg, Germany on April 27, 1904. It was the only ship that sailed to Canada from that part of the world in that year. There were 2250 people on board, mostly Galacians, Bukovinians and people from the Austo-Hungarian Empire. Peter was listed as ‘Galacian’, as a laborour and he had no money with him according to ship documents. No one on the ship logs was listed as Ukrainian but Peter and many others were. Ukraine as a country did not exist then but he came from the province or area of Galacia. 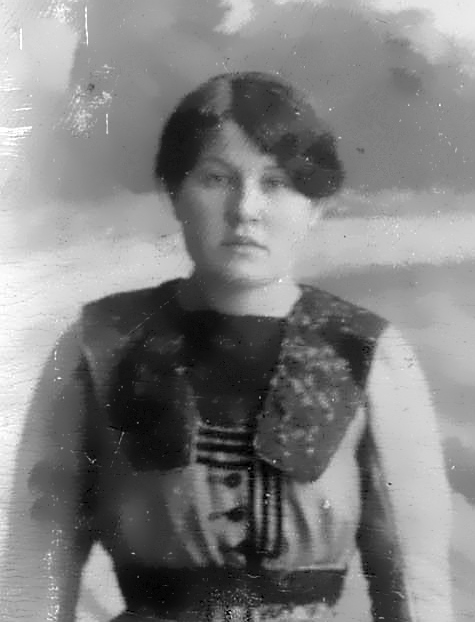 Her mother was Anna and her father was Nazarko Wolczuk. Because of the winds of world war that were blowing in Europe her parents mortgaged their home to send her to Ottawa.

Theresa arrived at the port of Quebec City on July 19, 1913 on the vessel ‘Willehad’ of the Canada Steamship Lines. The vessel left Hamburg, Germany July 4, docked in Bremerhaven, Germany July 5, and in Rotterdam, Netherlands July 7.

According to ship documents, she was 18 years old, her race was Ruthanian, her country of origin was Austria, she was listed as a ‘servant girl’ and she had $30 cash and her destination was Ottawa. There were 1261 passengers on board — 90% from her area of the world.

She was met at Ottawa station by the local Ukrainian community. She spent the first night at the home of the Danyluks on Isabella street. They knew of a widower (Peter my grandfather) with a young son and a meeting to introduce them took place. About two weeks after arriving in Canada on August 9, at the age of 18 Theresa married Peter. The wedding was at the Danylucks and it lasted 3 days.

The newly married couple and son Frank began their lives together at Blackburn Corners.

Later Theresa’s father, mother and sister were brought over as well. Her mother died shortly after arrival, her father lived with them until his death in 1924.